This is a variation of the Love theme for Flute and Harp. The lilting harp accompaniment has the added texture of suspended chords that creates a slightly different harmonic feel to what we have heard before. In the melodic line, there are slight changes in its overall shape, most noticeably by the addition of quintuplets which create further embellishment and interest. The simple arrangement for Solo Flute and Harp creates an intimate feeling almost as though it was meant as source music that can be heard by the characters themselves. 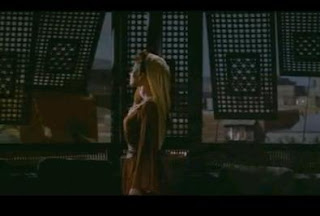 This may be a version that Rozsa created for the proposed song that Esther was to sing. He mentioned in interviews that there was to be a song in the score, Sam Zimbalist (the Producer) and he himself wanted this, it was Rozsa's own idea, probably for the first night scene. You can see it, Judah would have come across her singing on the balcony set, it would be just before the piece in the OST known as 'Love Theme'. This was probably not the existing 'Written in the Stars' song by Webster, which would have been a commercial record. The song might have been placed in the 'Memories' cue too, but for whatever reason it wasn't used, maybe was never even written. The inspiration for those two love-scenes artistically was clearly the 'Song of Solomon', right down to the lattice-work in the windows!
Posted by 2D23Dconversions at 04:52 1 comment:

His Father's Business - Version B

This is exactly the same as Version A except for the last 5 bars where Rozsa develops the music differently.

The whole notion of this particuar piece is to introduce the adult Christ, the iconic figure that everyone in the audience knows, but whose significance for the story hasn't yet been developed. Rozsa also uses the trio middle of the Christ theme here, as in the 'Miracle' and 'The Christ Theme: Alleliua' in the recorded material. That section also appears briefly in an unused version of 'Battle Preparations' at the point where in the final film, the hero says, 'Once before a man helped me ...'
Posted by 2D23Dconversions at 05:45 No comments: